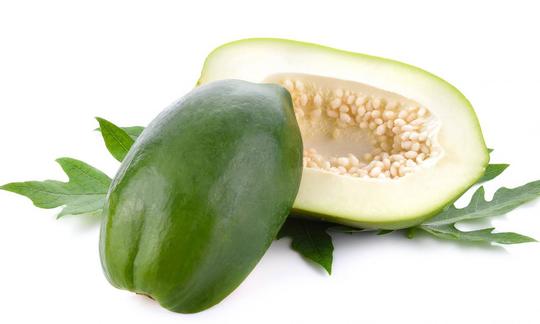 The papain contained in papayas is isolated using special methods and can thus improve the treatment of herniated discs (chemonucleolysis). 16

Wikipedia lists the following usages: papain is successfully used in ready-to-use products for digestive problems caused by pepsin deficiency and diseases of the pancreas. There are also combination products on the market that relieve inflammation, edema, and swelling after injury or surgery. The enzymes papaya contains are known to break down inflammatory metabolic products faster and optimize the flow rate of the blood. They are particularly effective in the accompanying long-term treatment of tumors and during radiotherapy. However, this is controversial. 15

Use as a medicinal plant:

Lohiya NK, Mishra PK et al. Reversible azoospermia by oral administration of the benzene chromatographic fraction of the chloroform extract of the seeds of Carica papaya in rabbits. Adv Contracept. 1999;15(2).

Adebiyi A, Adaikan PG, Prasad RN. Papaya (Carica papaya) consumation is unsafe in pregnancy: fact or fable? Scientific evaluation of a common belief in some parts of Asia using a rat model. British Journal of Nutrition. 2002;88(2).

The papaya plant is dioecious, which means that some trees are male, some are female, and in the papaya’s case, some others are hermaphroditic. Only the females and the hermaphrodites can bear fruit. The reproductive process in many plants is subject to unusual events.

Unlike the male papaya flowers, the female and hermaphroditic papaya flowers are not particularly showy, but they have an ovule that can grow into a large fruit filled with seeds that are capable of creating new plants.

What is the white mass i found inside my papaya fruit?

Depending upon the size and shape of the mass, you may be seeing what is called a viviparous phenomenon in your papaya , that is to say, germinated or pre-germinated seeds within the papaya that are forming fruit or related developmental structures. They usually appear as an unexpectedly large, white, rounded nugget inside the papaya when you cut it in half. There is some thought that this is most likely to occur in areas of high humidity.

It is hard, white and much larger than a seed.

In India, there has been some observation of increased vivipary and seed disorders in papaya crops but the increased occurrence has not yet been scientifically explained.

If you do happen to eat some moldy papaya, don’t worry. The vast majority of people who eat mold on papaya have no symptoms (though moldy fruit doesn’t taste good). A small number of people may have an adverse reaction to moldy fruit. If you have ongoing symptoms such as a rash or stomach pain, go see a doctor.

Hefty, plump and oblong, the average papaya fruit is an average of 7 inches long (though it can be up to 20 inches long) and weighs about a pound. While there are several varieties of papaya, the one you’ll likely see in your grocery store is the red papaya, which has juicy, melon-like pink/orange flesh and a sweet, slightly musky taste.

Also like melons, papayas have a center filled with seeds. Unlike melons, the seeds are black with a gelatinous outer casing and are edible, though their bitter, peppery taste means that they are often discarded.

The best way to tell if your papaya is ripe and edible is to cut it open to inspect its flesh and smell.

What Happens if I Eat a Bad Papaya?

Because papayas are not as common or familiar as fruits like apples or bananas, you might not know exactly how a papaya should look, how it should taste and whether it is perfectly ripe to eat. Also, because papayas are often shipped in from far-away, warmer climates, the papayas you see in the grocery store may be underripe, overripe, damaged or suffering from fungus or mold. Learn how to tell if a papaya is bad, how to cut a papaya and the best way to consume a papaya.

Papaya flesh is delicate when ripe, so handle your fruit gingerly both while transporting it and while preparing it to eat in order to avoid bruising.

First, cut off the stem. Then, slice the fruit open lengthwise. Scoop out the seeds and either discard them or reserve them for another recipe. From here, you can either scoop out the flesh with a spoon, or you can cut off the skin layer with a knife (much like you would a cantaloupe) and then slice and dice the remaining fruit as you wish.

If your papaya is ripe and free of mold and fungus, it’s a great addition to your diet and is absolutely good for your health. An excellent source of Vitamin C and anti-oxidants, papaya can help boost your immune system, fight inflammation and protect you from diseases like cancer and heart disease. One study found that eating papaya lowered the risk of Alzheimer’s disease.