Therefore, it is proposed that the Regulations be amended to include an outcome based requirement that prohibits weed seeds in an amount that is known to or would pose a foreseeable risk of harm to animal or plant health or the environment.

The current weed seeds standards outlined in the Regulations have not been updated in more than 30 years and do not reflect the weeds that are of most concern currently or those for which risk has not yet been determined.

The goal of renewing the Regulations is to develop a modernized risk- and outcome- based regulatory framework for feeds which:

Given the potential impacts associated with the presence of weed seeds in livestock feeds, there remains a continued need for an enforceable regulatory framework in a modernized regulations.

Modernization of the Regulations provides the opportunity to review feed controls, standards, labelling and other regulatory requirements. The purpose of this proposal is to review the regulatory oversight of weed seeds in livestock feeds and recommend possible updates and amendments to the current requirements.

It is important to note that the Canadian Grain Commission administers the Off Grades of Grain and Grades of Screenings Order which establishes grades and standards for the sale of screenings (mixtures of whole and broken grain that are removed from other grain as a result of cleaning and do not qualify for any other established grade) and specifically references “…seeds designated as injurious in the Feeds Regulations…” as part of the regulatory standard. As indicated above, it is proposed that the standards in section 19 and the tables in Schedule II of the Feeds Regulations, relevant to weed seeds in feeds, would undergo a significant revision. While it is expected that the revised list of weed seeds will continue to utilize the title “injurious weed seeds” the list will also incorporate additional weed seed species of concern, not currently included in the Regulations, which could potentially impact the compliance rating of future grain products sold as screenings. The AFD will continue to consult with CGC throughout this process to ensure impacts are limited, where possible.

The Canadian Food Inspection Agency (CFIA) has embarked on a comprehensive change agenda to strengthen its foundation of legislation, regulatory programs and inspection delivery. These directions set the context for the renewal of the federal Feeds Regulations (Regulations). Recent studies [49] showed that essential oils containing 1,8-cineole are toxic against the tick species Rhipicephalus (Boophilus) microplus, and neral and geranial have exhibited anti-inflammatory activity through significant and similar inhibition of the gene NLRP-3 inflammasome-mediated IL-1β secretion, showing use as functional food ingredients [50].

Forty-one compounds in commercial ginger and turmeric essential oils accounting for 94.60% and 87.67% of the total composition, respectively, were identified by Gas Chromatography–Mass Spectrometry analysis. The components were clustered ( Table 1 ) as homologous series of monoterpene hydrocarbons, oxygenated monoterpenes, sesquiterpene hydrocarbons, oxygenated sesquiterpenes, and others and listed according to Kovat’s retention index calculated in GC on an apolar HP-5MS column.

Phytotoxic effects observed at 1 µL/mL of ginger essential oil in P. oleracea (45.35%) and L. multiflorum (46.67%) ( Table 2 )—weeds commonly affecting tomato crops [55]—were not reproduced in tomato germination, but, unfortunately, both hypocotyl and radicle development were significantly inhibited ( Table 4 , Figure 3 A). These results agree with those of previous work in which seed germination of soybean was not inhibited by the aqueous extract of ginger rhizome at the doses assayed, whereas the hypocotyl and radicle length were reduced at the higher doses applied [56]. On the other hand, neither seed germination nor the hypocotyl growth of cucumber and rice were affected by ginger essential oil at any dose (0.125, 0.25, 0.50, and 1 µL/mL) assayed. The radicle elongation of cucumber was decreased in a dose-dependent manner up to a percentage of 21.44% at the highest dose ( Table 4 , Figure 3 C). Slight differences in the radicle lengths of rice among the measurements were observed, but the data are not presented due to the difficulty of accurately measuring curved radicles ( Figure 4 ).

Herbs and spices offer a wide range of flavors that increase sensory variety in food and beverages without additional energy [4] while providing health benefits, due mainly to their antioxidant properties [5]. Several spices are dietary agents with anticancer properties due to containing compounds like curcumin, gingerol, anethole, or zerumbone, which are powerful inhibitors of nuclear factor κB (NF-κB), protein complex involved in DNA transcription [6]. 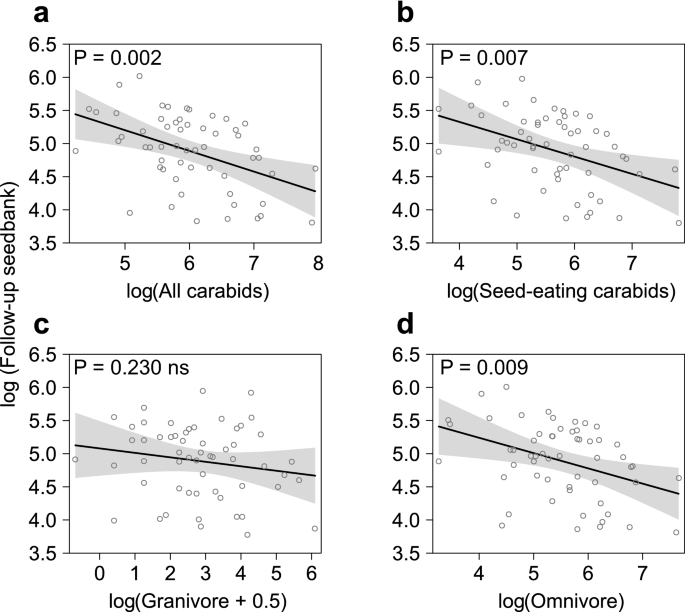 The outcomes of studies on in-field weed seed predation intensity of carabids are inconsistent 20,21 and appear context-dependent 22,23 . We lack both the large-scale replicated data for the contribution of carabid seed predation to weed regulation and the understanding of the trophic mechanisms underlying context dependency and resilience of weed seed predation and regulation 19,20 . Specifically, there is a knowledge gap for the role of the availability of alternative prey and how it affects weed seed predation by carabids across the crop-growing period. Here, we test for the context-dependency of seed predation to presence of alternative prey and for the generality of regulation across a highly replicated, large-scale study of 57 cereal fields in four EU countries (Austria, the Czech Republic, France and Sweden). We tested four expectations, such that: (i) there is a negative relationship between the change in the size of the weed seedbank over a year and the activity-density (AD) of carabids, indicative of weed seedbank regulation. The AD of carabids corresponds to the number of individuals captured using pitfall traps, which depends both on their activity on the ground surface and their density. (ii) The observed weed seedbank regulation relationship co-varies with the availability of alternative prey biomass; (iii) the relationship between the AD of carabids and weed seed predation, as evaluated using seed predation cards, will be significant and positive; and, (iv) the local availability of alternative prey biomass will be a significant co-variate of the per capita seed consumption by carabids, using seed cards. Carabid AD, seed card predation and alternative prey biomass were measured during the growing season and just prior to harvest, in each country, allowing us to test the hypotheses at two key moments during the cropping cycle. Carabid AD was described and tested for the groups of all carabid species, seed-eating (granivore + omnivore), granivore and omnivore that can respond differently to alternative prey. In addition, the proportion of arable crops in the landscape and the pesticide management intensity were both used as co-variables in our analyses as they could counfound explainations of weed seed predation and seedbank change.

Weed seed predation cards 16 , with 50 Poa annua seeds, were used to estimate weed seed predation by invertebrates. We selected seeds of P. annua because they are preferred by an array of spring breeding carabids 20 and it is a common weed in Europe. Seeds were glued to 95 × 40 mm card of sand paper (grain size 60). The seed cards were enclosed in a mesh cage (1 cm 2 wire mesh) to exclude vertebrates. The cards were exposed over 7 days simultaneously with the pitfall traps. The seed predation rate was estimated using the number of seeds removed from seed cards. Combining seed card and carabid data, we derived an estimate of the per capita seed consumption for carabids, calculated as the number of seeds consumed divided by the number of carabids captured per field and session (for each carabid group separately). We used this metric as an estimate of the individual efficiency of carabids for the sole purpose of assessing how it responds to the availability of prey.

Multiple linear regression model fits to test the weed seedbank regulation by carabids. The log(Follow-up seedbank) is plotted against the log-transformed AD of: (a) all occurring carabid species; (b) seed-eating; (c) granivore; and, (d) omnivore carabids in session 2. The line represents the fixed-effect prediction and associated 95% confidence intervals (shaded), with the open circles being the partial residuals. Negative slopes indicate a regulatory effect of carabid AD on the seedbank.