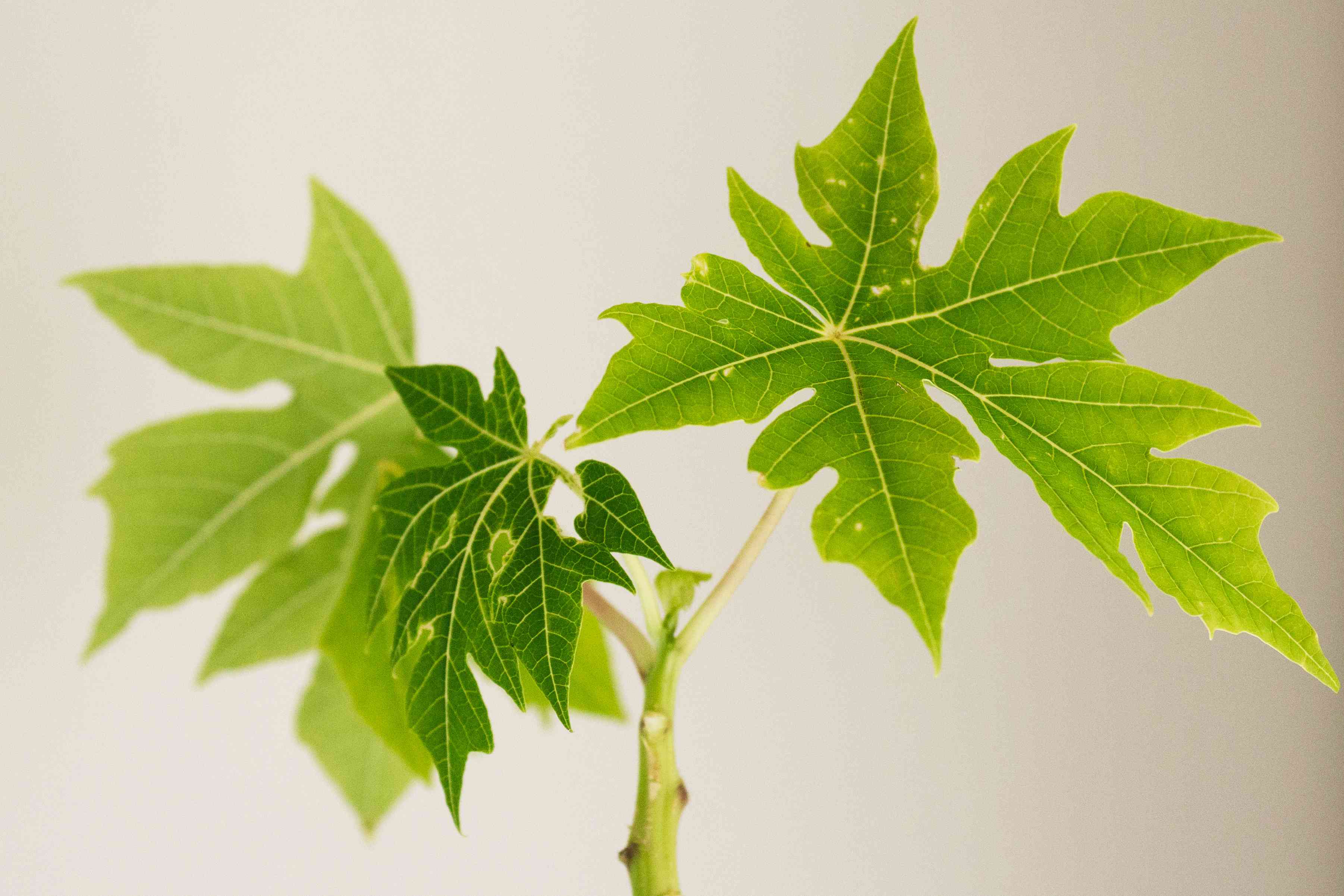 These plants need a prodigious amount of water. As the plant grows, expect to water it every three to four days. You want to water it thoroughly but never let water stand on top of the soil.

When grown indoors, use a loose, well-drained, very rich potting mix. Rot problems may occur if the potting soil is too dense and lacking in drainage.

Papaya plants sprout readily from seeds, even the seeds harvested from grocery store papaya fruit. To prepare the seeds, scoop them from papaya, spread them out on a single sheet of paper towel, and leave them out to dry for a week. At the end of the week, roll the seeds around to remove the dried seed-covering husks, then store them in a cool, dry place.

Papaya plants grown indoors grow so fast that they may reach the ceiling in a matter of months. For this reason, they are often pruned off at the top to keep them in check. Cut off the main stem to a couple of feet tall. The plant will send up several new shoots from the base of the plant. When these shoots are 1 to 2 feet tall, select the best one and trim off the others, including the original central stem.

Ripe papayas are most commonly eaten fresh, merely peeled, seeded, cut in wedges and served with a half or quarter of lime or lemon. Sometimes a few seeds are left attached for those who enjoy their peppery flavor but not many should be eaten. The flesh is often cubed or shaped into balls and served in fruit salad or fruit cup. Firm-ripe papaya may be seasoned and baked for consumption as a vegetable. Ripe flesh is commonly made into sauce for shortcake or ice cream sundaes, or is added to ice cream just before freezing; or is cooked in pie, pickled, or preserved as marmalade or jam. Papaya and pineapple cubes, covered with sugar sirup, may be quick-frozen for later serving as dessert. Half-ripe fruits are sliced and crystallized as a sweetmeat.

To reproduce the characteristics of a preferred strain, air-layering has been successfully practiced on a small scale. All offshoots except the lowest one are girdled and layered after the parent plant has produced the first crop of fruit. Later, when the parent has grown too tall for convenient harvesting the top is cut off and new buds in the crown are pricked off until offshoots from the trunk appear and develop over a period of 4 to 6 weeks. These are layered and removed and the trunk cut off above the originally retained lowest sprout which is then allowed to grow as the main stem. Thereafter the layering of offshoots may be continued until the plant is exhausted.

Corynespora leaf spot, or brown leaf spot, greasy spot or “papaya decline” (spotting of leaves and petioles and defoliation) in St. Croix, Puerto Rico, Florida and Queensland, is caused by Corynespora cassiicola , which is controllable with fungicides.

In southern Florida, on oolitic limestone, experts have prescribed liquid fertilizer weekly for the first 10 weeks and then 1 lb (1/2 kg) of 4-8-6 dry fertilizer mixture (with added minor elements) per plant weekly until flowering. Here a heavy organic mulch is desirable to conserve moisture, control weeds, keep the soil cool, and help repel nematodes.

At the Agricultural Research and Education Center of the University of Florida in Homestead, the late Dr. Robert Conover established a test plot of papayas grown from seed of 95 accessions from a number of countries and 94 collections in Florida in the hope of finding some virus-free strains. Most of the introductions were highly susceptible to papaya ringspot virus; local strains showed some resistance. Highest tolerance was shown by a dioecious, round-fruited, yellow-fleshed strain brought from Colombia by Dr. S.E. Malo several years ago. The fruits weigh 3-5 lbs (1.36-2.27 kg).

If a papaya plant is inadequately pollinated, it will bear a light crop of fruits lacking uniformity in size and shape. Therefore, hand-pollination is advisable in commercial plantations that are not entirely bisexual.

Generally, the fruit is melon-like, oval to nearly round, somewhat pyriform, or elongated club-shaped, 6 to 20 in (15-50 cm) long and 4 to 8 in (10-20 cm) thick; weighing up to 20 lbs (9 kg). Semi-wild (naturalized) plants bear miniature fruits 1 to 6 in (2.5-15 cm) long. The skin is waxy and thin but fairly tough. When the fruit is green and hard it is rich in white latex. As it ripens, it becomes light- or deep-yellow externally and the thick wall of succulent flesh becomes aromatic, yellow, orange or various shades of salmon or red. It is then juicy, sweetish and somewhat like a cantaloupe in flavor; in some types quite musky. Attached lightly to the wall by soft, white, fibrous tissue, are usually numerous small, black, ovoid, corrugated, peppery seeds about 3/16 in (5 mm) long, each coated with a transparent, gelatinous aril.

Bunchy top is a common, controllable mycoplasma disease transmitted by a leafhopper, Empoasca papayae in Puerto Rico, the Dominican Republic, Haiti, and Jamaica; by that species and E. dilitara in Cuba; and by E. stevensi in Trinidad. Bunchy top can be distinguished from boron deficiency by the fact that the tops of affected plants do not ooze latex when pricked.

It is hybrid derivative of the cross between CO.1 (female parent) and Washington (male parent). Fruits are medium sized weighing 1.2 to 1.5kg. It is a dioecious type. The fruits contain a TSS of 13.2°brix. The flesh is yellow with purple tinge. The tree has purple petiole and stem. Suitable for home gardens. The tree yields 80-90 fruits per annum.

It is a hybrid derivative of the cross between CO.2 (female parent) and Sunrise Solo (male parent). It is a gynodioecious type with harmophrodite flowers. It is suitable as a table variety. The fruits are medium sized. The flesh is red with a TSS of 14.6°brix. The mean fruit weight is 0.5 to 0.8kg. Fruits are pyriform in shape. The tree yields 90-120fruits/year.

It is developed by sib mating Ranchi type over a period of eight years. The plants are dwarf in stature and dioecious. Fruits are round with flattened base. They are medium sized and smooth skinned. Slight nipple and ridges present at the apex. Fruits have orange yellow flesh. There is no papain odor in the fruit. It is a good table variety with good keeping quality.

It is a selection from Washington type. It is a dioecious type suitable exclusively for papain production giving 14.45g of dry papain per fruit. Suitable for growing in all seasons and all soils with good drainage. Petiole color is pink. Duration is two years and yields 75-80fruits per tree with an average yield of 1500-1600kg of dry papain per hectare. Each fruit weighs about 1.5 to 2.0kg. The TSS content of fruit is 13°brix and papain contains 72.2% protein.