To check if your cannabis is ready for trimming, perform a break test on each branch. If it bends so much it nearly breaks, then it’s ready, and if it breaks right away, it might be overly dry, but still totally usable. Trim off the buds and seal them inside a mason jar for curing, opening it periodically over the course of about four weeks to let moisture escape. Johnson outlines a detailed schedule on his website, including instructions on how to look for mold.

After 55 to 60 days, growers begin paying close attention to their plants’ trichomes — the small, bulbous fibers that develop around the flower of the female plant. “Those trichomes will turn from clear to amber,” Lipton said. “They kind of look like red hairs. You know it’s time to harvest when about 10 to 15 percent of the trichomes turn that color.” On average, cannabis plants have a five- to seven-day window of peak harvest time.

“Growing cannabis in tight spaces is not my usual recommendation,” said Stephen Lipton, the cultivation manager at The Farm Recreational Marijuana Dispensary, an award-winning recreational facility in Boulder, Colorado, specializing in what it calls “craft cannabis.” At any given time, Lipton oversees close to 15,000 plants across seven different facilities in Boulder County. “If you have a really tight space and it gets too hot or too humid, you’re going to have big trouble.”

Temperature: 68 to 78 degrees Fahrenheit. “A tool you should always have is a little temperature gauge,” Lipton said. “They call them hygrometers. They’re cheap and tell you both the temperature and the humidity.”

pH of Water: 6.3 to 6.7. “You’ll need a meter that you can stick into your water and tell you the pH,” Lipton said. “You want something between 6.3 to 6.7 pH for watering your plants. That sounds like pretty sophisticated stuff but it’s really not. A lot of times your tap water will be 7.8. You can use what they call pH down. That’s a crucial step.”

Light: 2,200k. “For a closet set up, I would recommend a 175-watt HPS light,” Lipton said. “Some people try to use fluorescent lighting, but I wouldn’t recommend that. You’re just not going to get a very good outcome. Nowadays, HPS lights can just go right into your home outlet, and you’d just need a timer [to set the intervals]. Position the light directly overhead. They can be pretty powerful, so you’re going to want it at least two feet from the top of the canopy [to prevent the plant from overheating].”

Cannabis plants yield the highest-quality (and quantity) flowers after maturing. This usually takes about a month to happen. “I recommend planting in a five-gallon Home Depot bucket,” Lipton said. “It’s really important to have proper drainage, so you want to drill some holes in the bottom. The biggest mistake people make is that they overwater and suffocate the roots. Cannabis likes to be watered and dried out before it’s watered again.” During the vegetative cycle, the plant should be exposed to a minimum of 18 hours of light. Remember to open the closet door while the lights are on to prevent the space from heading north of 78 degrees Fahrenheit.

While most, if not all, medical and recreational farms cultivate cannabis from seeds, guaranteeing that their plants are free from viruses, most home growers, even those with experience, typically begin with clones — essentially trimmed pieces of female cannabis plants that have been rooted in separate pots. “When most people think of cannabis — you know, what you smoke — they’re thinking about the flowers of female plants,” Lipton said. “When you grow from seeds, half of them will be males. If you’re only going to do one or two plants, you don’t want to waste your time with that stuff.” A clone sourced from a dispensary or a knowledgeable friend guarantees that the plant is female and will eventually produce bud pending proper care. “You can get up to four ounces off the right plant — if you know what you’re doing.”

Even in our most progressive states, however, the law is far from simple. “In Colorado, it’s now county-specific,” Lipton said. “When the amendment first passed, they said you could grow six plants per person. But now, certain counties and municipalities have come out and said it’s just six per house — there’s no combining plant counts. That means you can have three vegetating and three flowering at any given time.”

To harvest, many growers begin by removing the leaves of the cannabis plant with trim scissors, followed by the buds (using pruners). “We call this bucking,” Lipton said. “Gloves are also extremely important for sanitation reasons as well as to keep your hands from becoming sticky with the resin from the plant.” 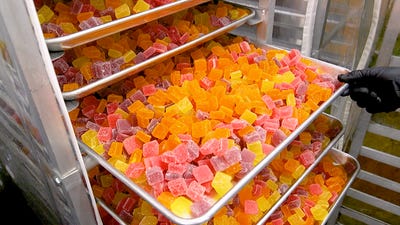 Jeremy: To give the economic benefits of legalization to people who generally have not received those benefits in the past, i.e. minority entrepreneurs, Black and brown people.

Jeremy: This is basically an effort to reduce, or at least understand, the flow of cannabis into the illicit market.

Narrator: When Adrian Wayman moved to Portland in 2016, he had to fight hard for his company to even exist.

Adriana: It is very white male-dominant. And there’s no reason that that is what it should be.