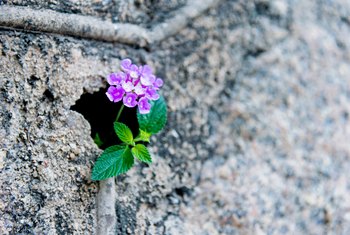 A weed-free patch of ground makes the best base for a rock-covered landscape area. Inspect the area before you place landscaping rocks to identify weed problems. You have several options for getting rid of existing weeds. If you aren’t in a rush to put down the rocks, cover the area with plastic and leave it for at least six weeks of hot, sunny weather. This sun solarization method kills the weeds underneath. Digging the weeds out to remove the full roots gets rid of many unwanted plants. Throw away the weeds and roots so they don’t grow again. You can also spray a premixed, post-emergent, non-selective herbicide onto the weeds.

A layer of landscape fabric over the soil blocks the growth of any weeds that you miss when you prepare the site. Secure the fabric using landscape staples so it doesn’t shift under the rock layer. When you start with a new piece of fabric, overlap it with the last piece so you don’t give the weeds a gap to grow through. A border around your rocky area creates a barrier between the rocks and the lawn. Weeds from other areas of the landscape may eventually make their way into the rocky area if nothing is there to block them.

Despite your best prevention techniques, you may notice a few pesky weeds sneaking into your rocks. Pull the weeds as soon as you see them, but don’t leave the plucked plants in your rocks. If possible, move the rocks back from the weed so you can get its root out when you pull. A handheld weeding knife or other small weeding tool helps reach the weed roots between the rocks.

Landscaping rock creates a low-maintenance ground cover that stays put, unlike lightweight mulch, which can blow away. The rock helps smother unwanted plant growth, but some stubborn weeds find a way to thrive. Weed prevention starts before you put the rocks down and continues with regular maintenance to stop a large-scale weed invasion.

Start With a Clean Slate

If you don’t get all of the weed roots out of the ground, you’re likely to see more unwanted growth popping up. Additional weed-killing methods can keep the population under control so the rock area isn’t overrun with weeds. A weed flamer is one option that works well since the rocks can withstand the heat and aren’t flammable. A quick blast of heat from the flamer kills the weed. Keep the weed flamer away from any flammable materials, such as your house or wood mulch. Boiling water can have a similar effect on weeds. You can also use a premixed herbicide, such as glyphosate, directly on the weeds.

Plastic is the best weed barrier under rock, but water won’t pass through it to feed the bushes’ roots. An option is to use the plastic, but leave large holes in it around the bushes. Alternatively you can combine the underlayments, placing landscaping fabric around the bushes and then covering the rest of the rock garden with heavy plastic. You’ll still leave holes for the bushes, but that space will be weed resistant because of the landscaping fabric.

A rock garden adds texture and color to a difficult area of a yard, such as a hillside, and it serves as a focal point. Adding bushes to a rock garden adds a touch of plant life that doesn’t require constant upkeep. When weeds pop up between the rocks, they mar the garden’s appearance, but one or more weed-control options – most notably, landscape fabric under the rocks – can be used to restore the site.

Because water passes through the landscape fabric under your rocks, holes in it need to be only large enough to fit around the bushes’ trunks. Cut lines in the fabric from its sides nearest to the holes for the trunks, so you can wrap the fabric around them. Covering the fabric with rocks helps hold it in place, although placing landscape staples every 2 feet or so along each edge of the fabric also helps.

Adding underlayments between the rocks and the soil creates a weed barrier that helps prevent weed seeds from touching the soil. If you already have rocks in place, rake them away temporarily while you install the underlayments. Choose landscape fabric or black plastic as the underlayments.

Rocks, including river rocks and gravel, commonly serve as mulch to help keep weeds from finding a home in flowerbeds. When you cover a rock garden completely in rocks, you have built-in mulch support. Whether your garden has large boulders as part of its design or is low and flat, using color and texture for design, ensure the area is covered completely with small rocks serving as mulch. Scrape the rock mulch about 2 inches away from the trunks of the bushes to help prevent root rot and other fungal infections.

A post-emergent herbicide kills weeds as soon as they sprout. Choose a non-selective herbicide such as one containing glysophate so it will kill nearly any kind of weed that appears. Care is essential when spraying the non-selective herbicide near your bushes because it can harm or kill bushes as well as weeds. Protect the bushes from herbicide drift by placing plastic or a large piece of cardboard between the bushes and where you spray, and spray only on days that aren’t windy.

Pulling weeds by hand is a traditional way to handle them organically, but other options exist that are easier on the back. Pouring boiling water over the weeds burns their leaves and kills the plants, as does pouring vinegar on them. Although salt is effective as a weedkiller, don’t use it in a rock garden that has bushes. Salt changes soil salinity and could kill your existing bushes while keeping future ones from growing.