Sterilize enough *damp* fine soil with heat to germinate all of your seeds. You can do this by treating the damp soil to temps of (no more than) 200F for 20 mins in a conventional oven, or in a microwave oven on high for 2 minutes, while stirring a couple of times. Your goal is to get and hold the entire soil mix’s temperature at 170F to 180F for about 20 minutes which can be monitored with a probe type thermometer. Let the mix cool thoroughly. This will insure that damp-off fungus spores have been killed in the soil mix. Make sure the soil mix is light and humusy (not real coarse). You can add a little sand or vermiculite to aid in drainage and weight.

Not to be a dick or anything, I just would rather someone corrected me if I misspoke than let me keep saying something incorrectly.

Your seedlings will be alot better off if you germinate directly in soil – less handling and mechanical disturbance means less chance of physical damage to the plant’s taproot (and roothairs) and less food reserves used to position itself due to the natural hormonal influence called Gravitropism. That translates into less food reserves used and increased seedling vigor, especially in the very early critical stages of seedling development.

Anyway, I have always used a damp paper towel in a plastic bag, not sealed, so as to allow some air circulation. Nowadays, I am more inclined to just drop it in some moist soil out of direct light. Or a starter plug. Actually, I will probably end up using the paper towel thing again. Always reverting to what I know works.

Buy some white 20oz styrofoam "drinking glasses", commonly called "Styro-Cups", and punch holes in the bottom (and side bottom) for drainage. I use a red-hot ice pick for this. These containers are 6 1/2" tall and will allow ample room for the taproot to grow before cotyledon emergence which will increase your seedling’s vigor. The taproot (radicle) is already at least 4" long at the point of emergence – don’t restrict it (in order to maximize seedling growth rate). Styro-Cups can be found on the shelf displaying picnic items at your local grocery store.

Soak the seeds in plain water for 12 hours prior to planting to hydrate them, which will speed up germination. In general, good seeds will sink, bad seeds will remain floating (they contain air, not an embryo). I first sterilize seeds in a bleach solution (1 Tbsp. bleach/1 gallon of water) for 1/2 hour to kill any fungus residing on the seedcoat.

OK, I’ll bite and make the correction as I have for many years. Using any (non-conventional) method other than sowing directly in soil is, well, quite ignorant of plant processes. 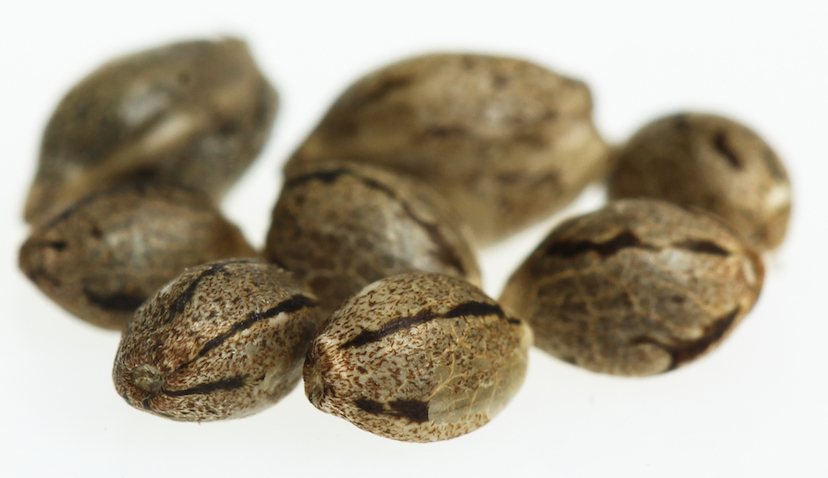 Maintain the seedlings in a sunny window, cold frame or greenhouse. As long as temperatures are between 60 – 80ºF, the seedlings will be fine. Dipping below 50ºF at night can slow growth, so you may want to bring the fragile plants inside in the evenings until they are hardier.

Mature, viable cannabis seeds have a “tiger stripe” on the sides.

Prepare a one-gallon pot with a light seedling soil mix. Fox Farm Ocean Forest or Black Gold also work great If you’d like to add worm castings, you can do so in a ratio of 4 parts soil to one part worm castings.

Every tiny cannabis seed represents a potential pound of cannabis flower. It’s crazy to think that so much abundance springs forth from such a small thing. If you’re looking to grow cannabis plants this summer, get started now with a visit to KindPeoples’ award-winning Genetics Department, where you can browse hundreds of strains in seed and clone form and pick the perfect plant to grow.

Your juvenile plants will be fine in their 1 gallon pot for the next 4 – 5 weeks of growth. Water moderately every day until moist but not soaking.

Place your cannabis seeds on the paper towel, and fold it over the seeds. Place towel in a plastic bag. Exhale some air into the bag and seal it.

Avoid pouring water over the newly planted seed, since this can disturb its placement. You can carefully pour just 1 – 2 tablespoons of water over the top if desired. Place seeds under a good light source and keep them warm. After another 48 hours, a sprout should emerge!

Look for viable, plump seeds with a telltale “tiger stripe” on the side that indicates maturity. Larger seeds tend to yield more vigorous and hardy plants.

Plant at least 12 seeds, knowing that 50% of them could turn out to be male plants, which you don’t want. You can also purchase feminized seeds, a bit more pricey than regular seeds, but then you will have female plants. Only female cannabis plants create the resinous flowers that we desire. Choose the most vigorous plants to keep and if you end up with more than 6 female plants, you can juice them or eat them in a salad for a burst of phyto-nutrition.