At the time, hemp was invaluable to a naval force. The strength of the rope produced by hemp came in handy aboard ships and as such, it was one of the most important crops that could be grown in a country that had an active navy.

First President of the United States George Washington, one of the Founding Fathers known to have grown hemp prior to prohibition.

Oil from the seeds was used to create things like paints or varnishes. Overall, the plant was primarily looked at as a cash crop for all of its uses.

According to the Washington Post it is true that George Washington grew hemp in abundance, especially on one plot of land he called Muddy Hole. The Huffington Post goes on to say that in his farm journal of August 7, 1765, Washington notes that he “began to separate the male from the female hemp… rather too late.” Thomas Jefferson wrote that hemp “is abundantly productive and will grow for ever on the same spot.” Hemp was a popular plant at that time and had tremendous value for many industrial applications. At times Virginia farmers even had to pay to grow it. Hemp strains were utilized for making rope, creating canvas and even being spun into clothing.

One such country was Britain, which saw the necessity to have significant crops of the planet. Growing hemp would be necessity for colonial Virginia to support the British. This is where the growth of hemp was introduced into colonial America. 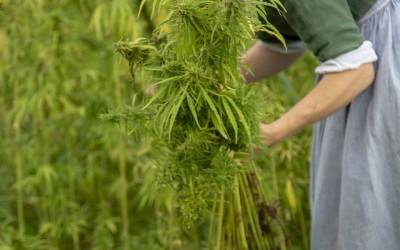 Cutaway of the hemp stalk

Fabric made from hemp