The fate of weed seeds in the soil has been an area of much research in recent years. Most studies have focused on the seeds that successfully produce seedlings since these are the seeds that cause immediate problems for farmers. In most studies, annual emergence typically accounts for 1 to 30% of the weed seed in the soil. Thus, the majority of seeds found in the soil seed bank fail to produce seedlings in any given year. The fate of seeds that fail to germinate and emerge is poorly understood. While some of these seeds are simply dormant and will remain viable until the following year, others are lost due to decay or consumed by insects or small animals. This article will describe results of an experiment that monitored the fate of seeds for the first four years following introduction into the soil.

Results: The emergence patterns of the four species were described in an earlier article (see emergence patterns). The fate of the seeds (emergence, loss or survival in soil) during the first four years after burial is shown in Figure 1. In the first year following burial waterhemp had the lowest emergence (5%) whereas greatest emergence was seen with woolly cupgrass (40%). Total emergence over the four years ranged from 300 seedlings (15% of seed) for waterhemp to 1020 seedlings (51%) for woolly cupgrass. More than three times as many seedlings emerged in the first year than in subsequent years for velvetleaf, woolly cupgrass and giant foxtail, whereas 140 waterhemp seedlings emerged in 1996 compared to only 100 in 1995. 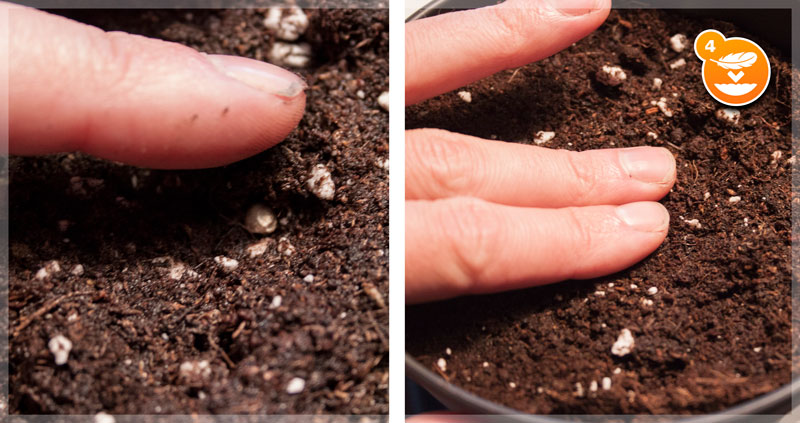 All you have to do now is wait. In our experience it often takes about 4-5 days for your seedlings to show. But to calculate for differences in conditions and seeds, we say 3-10 days is a safe estimate. As soon as your seedling has sprouted (first leaves reach the surface) you can remove the foil.

Step 3: Placing the seed inside the soil

Make sure your soil is wet, but do not soak it. It needs to be damp but not soaked, otherwise you risk your seeds to rot. In most countries, normal tap water is clean enough to use. Do not add any additives to the water.

All 5 seeds germinated in 4 days within 24 hours of each other. You can now place them under a grow light, behind your window or outside (during spring / summer of course).

Prepare your pots with clean fresh soil. It is often easy to use small pots for this, and transport them to a larger container later.